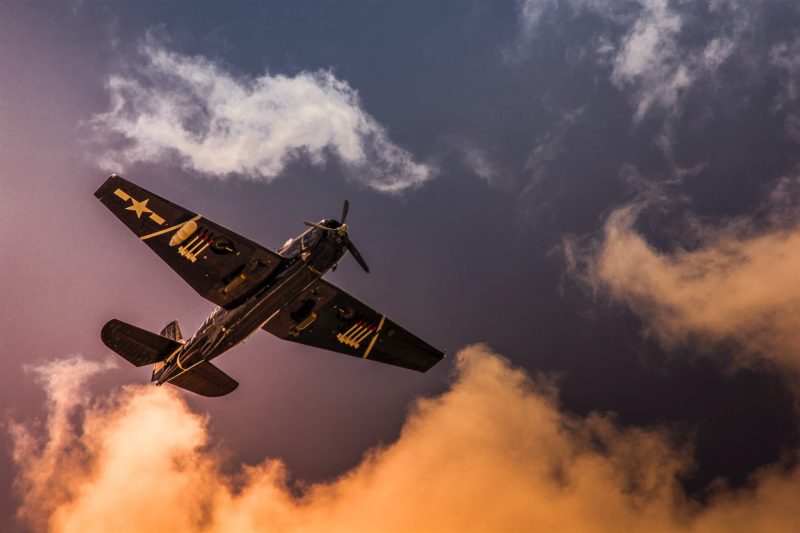 The invention of the airplane and other forms of modern aircraft advanced our society’s mobility, unlike any other. However, a skilled and adventurous pilot is essential to the success of any flight. Some of the pilots listed on our list of top ten professional aviators are likely familiar to you, while others may be new names altogether. Not surprisingly, many of these individuals became world-renowned after fighting in the skies during World War II. Others became famous for attempting incredible landings, crossing oceans, or, unfortunately, for seemingly disappearing from the sky.  Learn more about our top ten list of amazing aircraft pilots below.

The Wright brothers were known for their reliable methods of pilot control, which differs from other inventors who had focused primarily on building larger, faster engines in hopes of getting planes off the ground. Additionally, the brothers became experts in wing and propeller development. While there is some historical dispute of when and how the first airplane was invented, Orville and Wilbur Wright still maintain the title of inventors of the airplane, which would never have been possible without skilled pilots.

Perhaps the third most well-known pilot in the world, Charles Lindbergh, got his start in aviation as a parachutist and wing walker. Lindbergh was an American aviator and inventor who is most known for flying solo, nonstop from New York to Paris in May 1927, becoming the first to cross the Atlantic. Lindbergh was only 25 years old at the time of this flight.  This feat would actually mark the beginning of his career as a pilot. The journey took over 33 hours to cover 5,800 km in a single-engine monoplane called the Spirit of St. Louis.

It’s important to note that Lindbergh’s flight was not the first transatlantic flight ever, but it was the first solo flight of its kind. It was also longer than any other flight attempted.  Following this groundbreaking flight, Lindbergh and his wife would complete several survey flights to establish the shortest air routes to various destinations worldwide.

During his time in the United States military, Lindbergh would reach the rank of Brigadier General and was awarded the Medal of Honor in 1927, the Distinguished Flying Cross in 1927, and the Congressional Gold Medal in 1928.

Learn more: Which Private Jet Has The Longest Range

Amelia Earhart was born in Kansas in 1897, where she took up flying in her twenties.  She followed in Lindbergh’s footsteps – becoming the first female pilot to fly across the Atlantic Ocean in 1928. A co-pilot and a mechanic accompanied Earhart.  She received international acclaim for this flight and was also awarded the United States Distinguished Flying Cross.

Following her groundbreaking flight, Earhart would become an instructor at Purdue University and an advisor to aeronautical engineering students. Unfortunately Earhart is most well-known for her final flight. In 1937, Earhart attempted a flight around the world, but she and her navigator Fred Noonan, disappeared in the Pacific Ocean. During the flight she radioed that her fuel was low and the weather was concerning, however, her ultimate fate is still unknown to this day.

In her short career, Amelia Earhart set several flying records. She also wrote books about her experiences and help found the Ninety-Nines, and organization supporting female pilots. Earhart was also a noteworthy supporter of the Equal Rights Amendment.

Baron Manfred Von Richthoven, also known as the “Red Baron” became world-known during World War I as a pilot in the German Air Force.  He was a young man that didn’t live to see the long career of many of our other pilots on this list.  He died in 1918 at the age of 25.

The Red Baron was most well-known for shooting down more than 80 planes. He was the most deadly pilot on either side of the war and is a legend in German military history.

Best known for his 1922 solo crossing of the continental United States, Lieutenant James H. Doolittle was an expert pilot who gained experience as an American military general and pilot.  He made his famous cross-continental journey in less than 24 hours. Since his teenage years, Doolittle began attempts at flight. He would build his own gliders and jump off of cliffs with them. Never deterred by the wreckage or potential injuries, he would jump again and again. After graduating from the University of California Berkeley in 1922 and completing this landmark flight, Doolittle would go on to MIT to complete a doctorate in aeronautics.

In the Army he perfected his skills both with the 1922 flight as well as in 1927 when he performed his first “outside loop.” Finally, adding to his impressive early flight resume, Doolittle flew from takeoff to landing in 1929 referring only to flight instruments such as the altimeter, artificial horizon, and direction gyro.  After the feat, the New York Times reported, “Aviation has perhaps taken its greatest single step in safety.” Doolittle became a flying instructor during World War I and was recalled into active duty in World War II.

In addition to these foundational accomplishments, James Doolittle would later take up air racing, winning a number of competitions. In 1932 Doolittle set the world’s landplane speed record.

In 1942 Doolittle was tapped by the military to train flight crews for an unknown mission, which we would later learn was the bombing of Tokyo on April 18, 1942 as part of the Pacific battles of World War II – only four months after the Japanese bombing at Pearl Harbor. For this successful effort he would earn the Congressional Medal of Honor.

Did you know that Alaska has more airplanes per resident than any other state? Due to the remote nature of the state, it’s sheer size, frigid climate, the need for supplies, and localized transportation, air travel could be considered more essential than cars in Alaska.

Noel Wien was an American aviator who introduced the airplane to Alaska in 1924, founding Wien Air Alaska, the first airline in the state.  Wien was no stranger to the frigid conditions of the northern United States. He was born in Wisconsin and grew up in Minnesota. In 1921 he learned to fly his first airplane – reportedly learning to fly in just one day. After learning to fly he began a barnstorming career and even joined a flying circus to earn the funds necessary to pay for his first personal plane.

Wien arrived in Alaska in 1924 with an open cockpit Standard J-1 biplane and was the only pilot in Alaska at the time. He faced very little competition for his services in the early years and was the first to fly to the Arctic Circle from Alaska or Canada, also the first to fly from North America to Siberia via the Bering Strait. He incorporated Wien Alaska Airways, Inc. in 1928 and would fly commercially until 1955.

Wien was known for his resilience, much needed to establish a commercial airline in frigid Alaska. He reportedly still flew when diagnosed with polio and even continued to fly after losing one of his eyes due to injury in the 1940’s. Wein died in 1977, at that time retired and living in Bellevue, Washington.

For any modern top ten list, we must include Chesley “Sully” Sullenberger, III.  Sully was a U.S. Air Force fighter pilot during the 1970s. He would later become a commercial airline pilot with Pacific Southwest Airways, later U.S. Airways.  On July 15, 2009, Captain Sullenberger made international headlines when a flock of Canadian geese damaged his plane’s engines. Sullenberger was flying 155 commercial passengers at the time and performed an emergency water landing on the Hudson River in New York City. All 155 passengers survived the crash and Sully was the last to exit the water-landed aircraft.

Sullenberger is now a speaker on aviation safety and has helped develop new protocols for safety aboard airlines.   He has also served as co-chairman of the Experimental Aircraft Association’s Young Eagles program, which introduces youth to aviation careers.

In 2009, Sullenberger was listed among Time Magazine’s most influential heroes and icons. He has also earned a Master’s Medal from the Guild of Air Pilots and Air Navigators and has been presented the Key to the City from New York City. He retired from his career as a commercial pilot in March of 2010.

Charles “Chuck” Yeager is a retired U.S. Air Force officer and fighter pilot. In 1947 he became the first pilot in history to have traveled at the speed of sound, reaching Mach 1.07 speed – living to tell about it.  Like others on this list, he attained the rank of Brigadier General, fighting in both World War II and the Vietnam War. He has been awarded the Air Force Distinguished Service Medal, the Army Distinguished Service Medal, two Silver Stars, a Bronze Star, two Legions of Merit, three Distinguished Flying Cross awards, and a Purple Heart.

Yeager retired from the service in 1975 and is currently in his late nineties and living in West Virginia.

Traveling to London? Check out our list of the Best Private Jet Airports in London

Like many pilots on our list, Erich Hartmann became famous as a fighter pilot during World War II.  Hartmann was a German fighter pilot who would eventually come to be known as the best in history.  He flew 1404 combat missions, downed 352 enemy aircraft (including seven American fighters) and earning the title of the “Greatest Ace of All Time.” Never averse to combat’s consequences, Hartmann was forced to crash-land his aircraft 16 times during his military career.

Hartmann started flying gliders as a teenager and later enlisted in the Luftwaffe, where he excelled at gunnery. Pairing these two skills made him a proficient fighter pilot. He completed his pilot training in 1942, just in time to fight for Nazi Germany in the war. Fighting up until the day the Germans surrendered to the Allies, Hartmann would be tried and convicted of war crimes and spend 10 years in a Russian prison. Upon his release, he returned to the West German Air Force. In 1997 the Russian Federation posthumously dropped the war crime charges against him. He would retire in 1970 and become a flight instructor until he died at the age of 71 in 1993.

Robert “Bob” Hoover was a United States Air Force fighter pilot during World War II.   Hoover learned to fly as a youngster in Nashville, Tennessee, where he worked at a grocery store to pay for his flight lessons.  He would later enlist in the Tennessee National Guard and was sent to U.S. Army pilot training, launching a memorable career.

Hoover was shot down over the Mediterranean in 1944 and held in a German POW camp for over a year before escaping, stealing an enemy aircraft, and flying himself and other prisoners to safety.  Despite this harrowing story, in modern times, Hoover was better known for his time as an air show pilot, where he flew for over 50 years before his retirement in 1999.
A number of pilots made history during an international conflict, especially World War II. Others will always be remembered for being the first to navigate the globe or cross an ocean successfully – charting new courses for future commercial travel and sending the global economy to new heights. No matter what each of these pilots is remembered for – there is no debating the mark each has left on the industry of air travel. Book a private jet charter to many luxurious destinations using BitLux, a company dedicated to providing best in class service for travel on a global scale. Offering everything from Private Jet, Cargo Jet, and Helicopter Charters to Aircraft Management and Placement, BitLux is a leader in traveling indulgently.