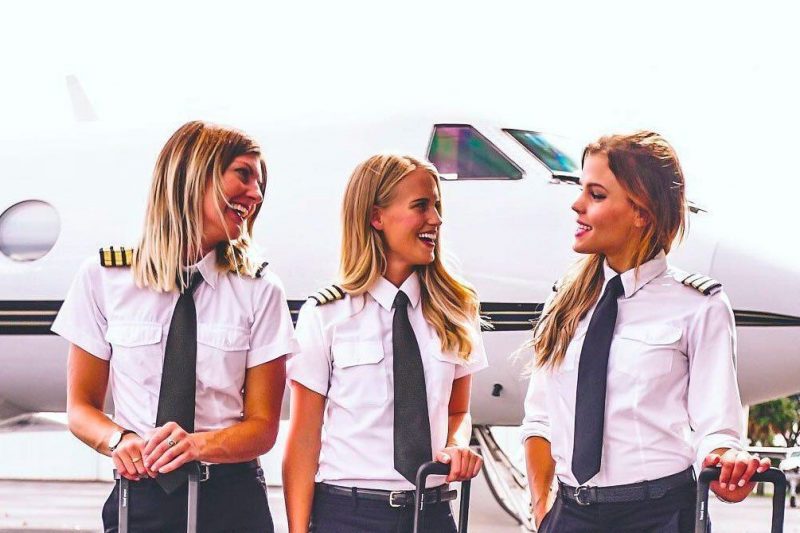 For as long as humans have dreamed of flight, women – just as often as men – have envisioned themselves piloting a craft through the skies toward faraway lands.

Although it may have taken women a little longer to ‘wo-man’ the helm so to speak, that hasn’t stopped women from making their mark on aviation. In this feature, we highlight some of the most famous (yet not as often heard of) women in aviation.

We hope that this inspires others to follow in their wing-steps.

Here are the top 10 most famous women pilots in history:

Perhaps the most famous female pilot ever, Amelia Earhart became the first woman to fly solo across the Atlantic Ocean in 1932.

When she began her journey from Newfoundland to Paris in a Lockheed Vega 5B, she kicked off a short career full of highlights. Her achievements included setting altitude records and becoming the first woman to fly solo across the Pacific Ocean.

In 1937, as she attempted to make a record-breaking journey around the world, the Lockheed Electra in which she was flying disappeared. Her disappearance – and the fact that neither her body nor her plane has been confirmed to be found since she disappeared – remains one of the greatest mysteries today.

A staunch proponent of women’s involvement in aviation, especially during World War II, Jacqueline Cochran became one of the most well-known racing pilots of her day.

During the war, she wrote to First Lady Eleanor Roosevelt advocating for the creation of an all-women’s flying division in the Air Force.

By 1943, she was director of the Women Air Force Service Pilots (WASP), and she received a distinguished service medal for her service following World War II.

Inspired by the brave pilots during World War I, Bessie Coleman was rejected from flight schools in the United States because she was Black.

In 1920, she moved to France where she completed an advanced course in aviation and made her career out of performing in aerobatic shows.

Tragically, she was killed in a flying accident in 1926 when she was thrown from her plane.

A whole generation of young girls grew up knowing they could make their dreams of going to space come true thanks to the influence and achievements of Sally Ride.

The first American woman to travel to space, she joined the crew of the space shuttle Challenger in 1983, but was not in the vessel when it exploded.

She operated the robotic arm and assisted in deploying two satellites into space during that mission, and was added to the Astronaut Hall of Fame in 2003. Ride still remains the youngest American astronaut to travel into space.

In 1930, Amy Johnson became the first woman to fly solo from England to Australia, undertaking the journey in a de Havilland Gypsy Moth. Additionally, she was the first woman in the world to qualify as an aircraft engineer.

During World War II, she joined the Air Transport Auxiliary.

Johnson died in 1941 when the plane she was piloting crashed into the sea under poor weather conditions.

When she was just 26, Valentina Tereshkova beat out 400 other female candidates to become the first woman to travel into space as part of the Soviet space program.

Tereshkova has received a variety of honors and awards that recognize her unique achievements in aviation and space travel.

Ever Wondered: What Food is Served On a Private Charter Flight?

Harriet Quimby broke barriers two years in a row: First, in 1911, when she became the first female to be granted a pilot license by the Aero Club of America.

Then, in 1912, she was the first woman to fly across the English Channel when she flew from Dover to Calais in 59 minutes.

When she was just 37, Quimby died after she was thrown from her aircraft mid-flight. She is remembered as one of the true pioneers for women in aviation.

Born in 1922, British pilot Sheila Scott earned her pilot’s license in 1960, becoming a demonstrator for Cessna and Piper to help pay for her love of flying.

Book With Crypto: Use Bitcoin To Pay For a Private Jet Flight

In the summer of 1944, during the height of World War II, a regiment of Soviet women was organized to execute a nighttime bombing offensive against German invaders.

The 588th regiment became known by the Germans as “the Night Witches” due to the timing of their raids. They made the Soviets the only participating group in World War II to deploy women in aerial combat.

The Night Witches fought for months without stopping, carrying out thousands of bombing missions in outdated Polikarpov Po-2 biplanes. These slow planes carried armament and were designed for ground attacks and aerial reconnaissance.

Polly Vacher was always interested in flying, but a charity skydiving event in 1989 accelerated her love for planes.

She obtained her pilot license with her husband, Peter, in 1994, and the couple circumnavigated Australia. In 1997, she flew solo across the United States and the North Atlantic in both directions.

Polly Vacher later went on to fly around the world to raise money for Flying Scholarships for Disabled Next, and has since become the first woman to fly solo over the polar regions.

A Look Back at Women In Aviation: Final Thoughts

As you can see, women have had a profound impact on aviation. The women in this feature pushed the boundaries of what was thought possible, shattered the glass ceiling and bucked gender stereotypes with gusto.

We truly look forward to what future generations of women will contribute to the ever-evolving aviation industry. Perhaps, even you.

A fully stocked bar is also available for an in-flight drink or two, and for the crew, there is a separate rest area. In truth, everything has been thought of and many A-list stars, Mark Cuban, John Travolta and Larry Ellison to name just a few, have opted for this industry-leading Gulfstream model.

Other savvy business people have also realized the potential of owning the Gulfstream G550 not only for personal use, but for rental opportunities. Before purchasing one they understand that all the costs and expenses have to be calculated.