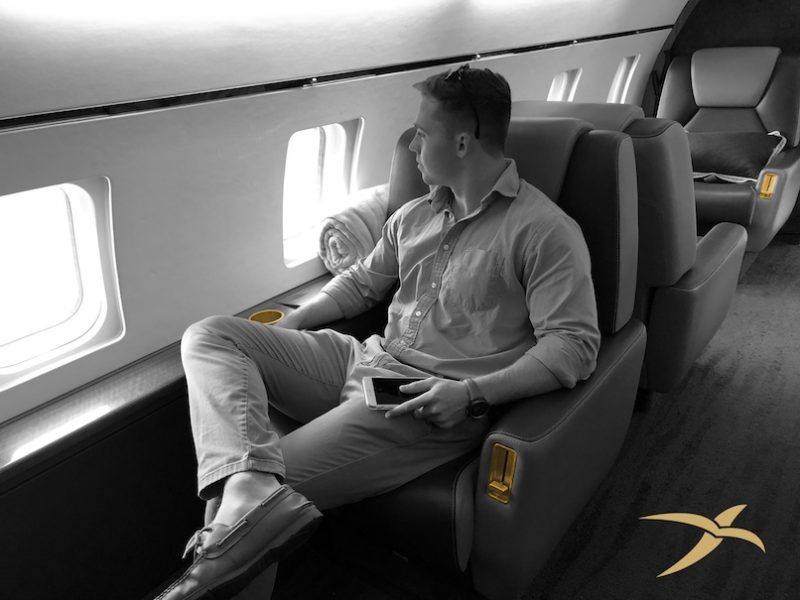 01 Mar The Safest Way to Travel

Are private jets a cleaner and safer option way to travel than commercial?

As concerns mount regarding the Coronavirus, people are more conscious than ever before about minimizing their exposure to viruses and contagions. And with good reason.

It’s not just the newly emerged Coronavirus that we need to be concerned with. Each year over 32 million individuals contract the flu, resulting in 14-21 million medical visits, 300-500k hospitalizations, and 18-46k deaths.

A growing concern around travel is reducing the risks for self and family when traveling for business or leisure. But what is the safest way to travel? And how do private jets and private chartered flights compare to commercial airlines when it comes to safety and cleanliness?

This guide will explore the ways in which private jets stack up against their larger commercialized counterparts.

Let’s Look at the Main Culprits

The bathroom isn’t the only place to exercise caution. In fact, many areas of large commercial airplanes pose a significant risk.

A 2015 study revealed a number of areas on commercial flights that were alarming.

We hope you don’t gross out easy because this one was a doozy. When tested, seatback trays had over 2,150 colony-forming bacteria (CFB) per square inch. For comparison, that is a whopping 8x higher amount than on the TOILET HANDLE.

Staff are rushed, with minimal time between flights in order to optimize profits and efficiency. Cleanup protocol generally focuses on the removal of visible trash (i.e. wrappers, cups, napkins, etc.), and if they remember, a quick haphazard “wipe down”. In fact, one HuffPost interview asked flight attendants how often the trays were actually wiped down. The answer? Once a day.

Private Jet staff are trained to exceed all standards as a normal part of operating procedures. They meticulously clean trays by both washing them (wiping) AND sanitizing them with eco-friendly, safe, and effective anti-microbials designed to eliminate up to 99.99% of pathogens and contagions.

Testing reveals that air vents in commercial airliners have around 285 colony forming bacteria per square inch. Even more troubling is that varying rates of airflow and positioning acts as thrusters to propel bacteria and viruses around the cabin with ease, meaning a single infectious passenger could potentially infect the entire cabin.

Sanitation of air nozzles isn’t always part of cleaning protocol since they generally don’t have any “visible” need to be cleaned. Yet they are in constant contact with each passenger having their own personal preference for the force and direction of airflow, often being adjusted several times during the same flight.

Not only is cleaning and sanitation of air vents part of the disinfection process between each flight, but fewer passengers are also touching them.

This is one item you can’t avoid touching. This also means everyone else has touched it too. Hard flat surfaces such as metals and plastics are known to keep viruses alive for up to 15 hours. This means contamination builds up all day between flights.

Rushed flight attendants have hundreds of buckles to clean (in addition to the rest of the cabin) and mere minutes between flights. This leaves plenty of room for error and shoddy wipe down efforts.

Private jet staff are never rushed. They adhere to strict protocols with designated time-slots optimally planned to provide staff with the time they need to not just do the job, but do the job right. This includes sanitation and sterilization of belt buckles and buttons.

It’s not just heads that touch these. As people walk down the aisle, they often place their hands on the headrests to maintain their balance (especially when lugging carryon bags).

Commercial flight cleaning does little to prevent or limit the spread of contagions on headrests, often relying on a thin paper sheet to cover the headrest or giving them a few swipes with a lint brush between flights.

Attention to detail is what private jet travel is known for. This trend continues with the headrests and seats, carefully cleaned and sanitized between flights using dry clean antibacterial and anti-viral family safe solutions.

Airplane blankets are a breeding ground for bacteria and viruses. Their fibrous nature makes them especially prone to attracting and holding onto contagions.

A lesser talked about truth about commercial airlines is that many don’t clean or even swap out blankets between flights. A number of airline employees have publicly stated such, including in one HuffPost interview that revealed that freshly washed blankets are only supplied for the first flight of the day.

Worse yet, a subsequent Wall Street Journal report revealed that many airlines only clean their blankets ONCE every 30 days.

Sanitation, cleanliness, and safety are at the top of concerns for private jet staff and charter companies. They have meticulous protocols in place to ensure every guest experience matches that of an upscale hotel in flight. Pillows, blankets, and other fabrics are cleaned thoroughly between flights and NEVER reused.

In-flight beverages also may pose an additional health risk. Especially those made from “on flight” water. Water used for drinking, coffee and tea is stored in on-plane water tanks that are not regularly cleaned, nor are the hoses that move the water from the tanks to the nozzle. Check out some Popular Private Jet Airports and find a destination you like.

Poor maintenance, sanitation and regular cleaning of tanks, hoses, lines and taps/nozzles can result in an increased risk to health.

Do not utilize “tanks” and provide bottled water of the highest quality that is used for drinking or making other beverages.

Commercial planes make up to 46 flights per week. With each flight carrying between 200-450 passengers, that means each plane is in intimate contact with between 11,500-20,700 individuals each and every week.

The risk of viruses and other pathogens being left behind is astronomical as compared to low flight and low passenger numbers of private charter jets.

Greater Attention to Detail and No Room to Cut Corners

Smaller cabin sizes, fewer guest passengers, and a true dedication to excellence means that more attention to detail is given to every aspect of the plane. From safety measures to sanitation, private jet staff and teams are focused on service, not numbers.

Unlike commercial airliners that are rushed to push as many flights into a day as possible, private charters have more time to dedicate to ensuring rigorous safety testing and evaluation is conducted prior to every take-off.

One major safety benefit of private jets is that their nimble size makes them more easily accommodatable at small airports and private landing strips. Unlike commercial flights that have to “stick it out” through rough patches and turbulence, or be re-routed to the nearest big hub, private charter jets can often find alternative landing strips closer to your destination.

We live in an age where emerging biological threats are a real and prevalent threat. SARS, Zika, Coronavirus, H1N1, and more are all real risks that can be minimized by taking the right precautions for you and your family. BitLux Private charter jets offer not only superior service, support and luxury, they also exceed sanitation standards and provide a clean, safe environment while you travel to your destination.