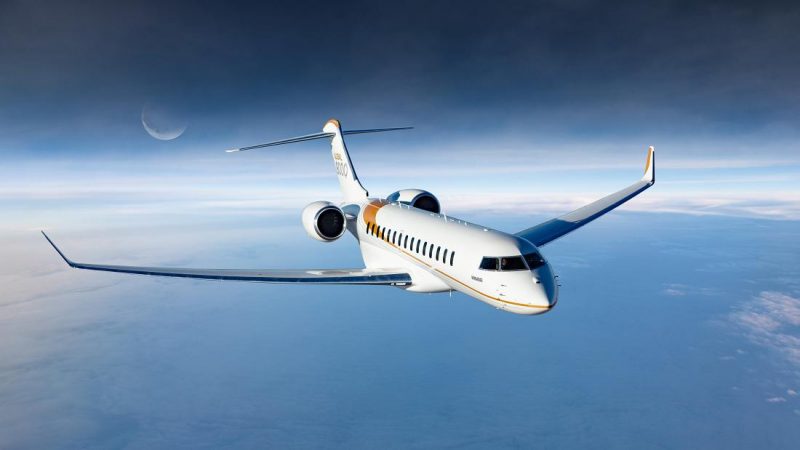 02 Jul Supersonic Private Jet Said to be the ‘Fastest Since the Concorde,’ According to Company

Industry innovator and jet manufacturing titan, Bombardier, has recently unveiled its plans to develop a new frontrunner in the supersonic jet category.

Supersonic travel has long been a thing of the past, with the last supersonic jet retired back in 2003. Since that time, jet manufacturers have long sought to break into the supersonic space, offering unprecedented performance and faster travel capable of keeping pace with today’s fast-paced world.

This quarter, Canadian-based Bombardier claims that its new concept is set to become “the fastest in civil aviation since the Concorde.” A lofty claim, but if any company can do it, it’s Bombardier.

Dubbed the Global 8000, this ‘supersonic’ jet is expected to make its debut in just three short years (by 2025). With a capacity of up to 19 passengers, the jet is said to have a range boasting 8000 nautical miles (or 9,206 miles). The speed demon is also said to have a top speed caping out at Mach .94. For reference, a speed of Mach 1 is the actual speed of sound.

Designs Leaning on the Global 7500

Perhaps aiding Bombardier in an expeditious launch is the fact that the Global 8000’s design is based on the already successful Global 7500’s platform. For those of you keeping track, the 7500 hit a major milestone last year, briefly breaking the speed of sound during a test flight accompanied by a NASA F/A chase plane. During this test run, the aircraft managed to hit an astonishing speed of Mach 1.015.

A Luxury Airliner that Holds Nothing Back

As if performance wasn’t enough, the Global 8000 will be fully decked out to the brim, featuring luxury accommodations, and special lighting to counter jet lag. The aircraft will also feature ‘zero gravity’ position seating with a cabin altitude of 2900 feet while soaring the skies at 41,000 feet.

The Global 8000’s long-range capabilities make it an ideal option for efficiency-minded and time-constrained travelers, offering exclusive direct flights from the likes of Los Angeles to Singapore, Perth to London, Houston to Dubai, and more, according to company representatives.

The Race Back to Supersonic: finish line in sight

The last supersonic flight, aboard the Concorde, was nearly two decades ago. At the time, the Concorde was considered a modern marvel, utilized by both Air France and British Airways as early as 1976. Famed for its fast transit times across the Atlantic, the Concorde gained notoriety for its blockbuster performance.

However, an unfortunate and devastating crash lead to the discontinuation of the jet, just three short years after the incident. In 2000, an Air France Concorde crashed shortly after departure from Paris, killing everyone on board, and adding four more individuals to the death toll who were on the ground at the time.

By 2003, the Concorde was retired, but hope lived on that one day another supersonic jet would take its place.

According to industry insiders, the crash wasn’t the only factor behind the jet’s discontinuation. At the time, an average round-trip ticket cost about $12,000 per seat. This, combined with falling passenger numbers, left the aircraft running on fumes as far as profitability goes.

Today, however, new technology and innovations have made considerable strides in reducing costs while improving performance and safety.

Several manufacturers have taken to the helm, working tirelessly to develop new supersonic jets that are environmentally friendly, as well as performance-minded.

Boom Supersonic is one such company, currently developing a jet it refers to as ‘Overture’. According to representatives from the Denver-based company, the Overture will be capable of hitting speeds surpassing that of the speed of sound by 1.7x (that’s about 1,300 miles per hour). Although this would make the Overture markedly slower than the Concorde, it still puts it leaps and bounds ahead of current airliners, which typically range around cruising speeds of just 500 mph.

As it turns out, airlines are taking notice, with significant interest from United Airlines, who announced just last year that it had put an order in for 15 jets from Boom Supersonic, with an option to bump that up to 35 once the company is able to prove it has a passenger-ready jet capable of breaking the sound barrier.

According to United, these jets would dramatically cut down on travel times, with flights from London to New York projected to clock in at just three and a half hours. Similarly, flights between San Francisco and Tokyo would be reduced to just six hours.

Regardless of who gets to the finish line first, this next decade is the decade of the ‘Supersonic’ as these innovative jets are making a big comeback.