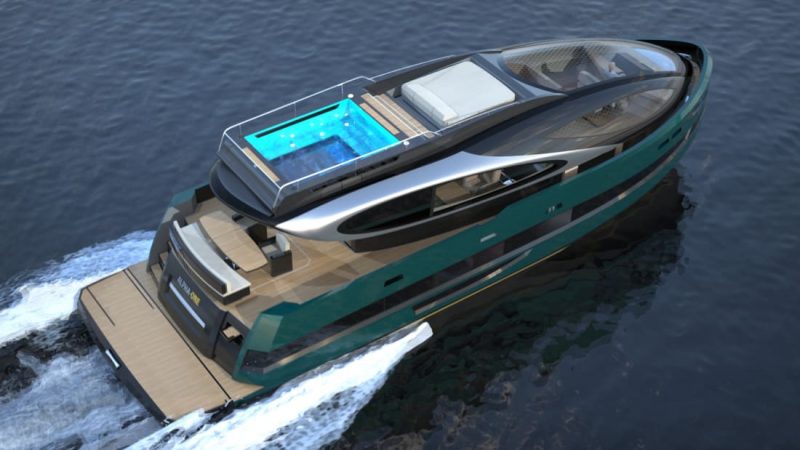 A Yacht Concept Reminiscent of Starfleet

In the hyper-competitive world of yachting, releasing a truly breathtaking, eye-stopping entry into the foray is no small feat.

Yet Lazzarini Design has done just that. The company, known for pushing the bounds of aesthetics and functionality with technology forward concepts that near the ‘outrageous’, has done it once again.

No one thought the brand could up-stage its last years’ concept, a flying superyacht. Yes, you read that right, a superyacht with the capability to go from sea to air.

But despite the odds stacked against it, Lazzarini Design has injected new life into the world of yachting, introducing a visually stunning, family-friendly concept inspired by private jets and space travel.

The Royal Alpha One

The Royal Alpha One might be ocean-bound, but one look and you’ll immediately think ‘spaceship’. Its modern, technology-forward, aircraft-esq design was inspired from upscale private jet and spacecraft designs.

Immediately striking Is its silver, black and green exterior, made from carbon fiber and glass. Sharp lines, a futuristic design, and a rounded glass ‘cockpit’ area all lend to its futuristic styling.

Measuring at 65 feet (20 meters), the Royal Alpha is notably smaller than its superyacht counterparts, making its design a bit unorthodox. However, what it lacks in sheer size, it more than makes up for with space utilization, functionality, and aesthetics.

Officially inspired by Lazzarini’s own Royal Jet Capsule, a 7.6 x 3.3 meter yacht pod, this ocean-bound vessel features photochromic glass surfaces that are nothing short of amazing. Photos don’t nearly do it justice.

Those prone to cabin fever will appreciate the yacht’s three decks, with the vessel uniquely engineered to resemble a layout reminiscent of a private jet, including spacious lounging areas outfitted with fine luxury seating.

The Royal Alpha One might be smaller than other ‘superyachts’, but its design has been carefully planned out to make the most of the space it does have, capable of comfortably handling up to 20 passengers. Its interior also features three suite cabins for overnight stays.

As for amenities, the Royal Alpha One doesn’t disappoint either. An integrated garage is jam-packed with water toys, while the interior features an elegant dining room perfect for romantic or family dinners. However, perhaps the vessel’s most notable feature is the panoramic rooftop, complete with a hot tub with a retractable bottom.

For the performance and gear-heads, the vessel is powered by twin or triple Volvo Penta IPS propulsion systems, capable of achieving max speeds ranging between 32-42 knots. Environmentally conscious individuals will be excited to learn that the company features a Hydrogen-powered propulsion upgrade.

So what will all this cost you? The concept project currently estimates a price tag that will range around $3 million (€3.5 million). Those who can’t wait to get their hands on this feat of engineering will be pleased to know that a model of the hull has already been completed, with Lazzarini estimating build times between 15-16 months. Given those projections, we may see the first Royal Alpha One hit the waves as soon as the end of 2023.

However, it should be noted that the project has not been officially greenlit by Lazzarini. Pending a buyer, the vessel is set for production at a moment’s notice.

But don’t worry, if this vessel doesn’t get you excited, you’ll be pleased to know that Lazzarini isn’t about to sit on its laurels. Known for its boundless innovation in the world of Yachting, future concepts are literally on the horizon.