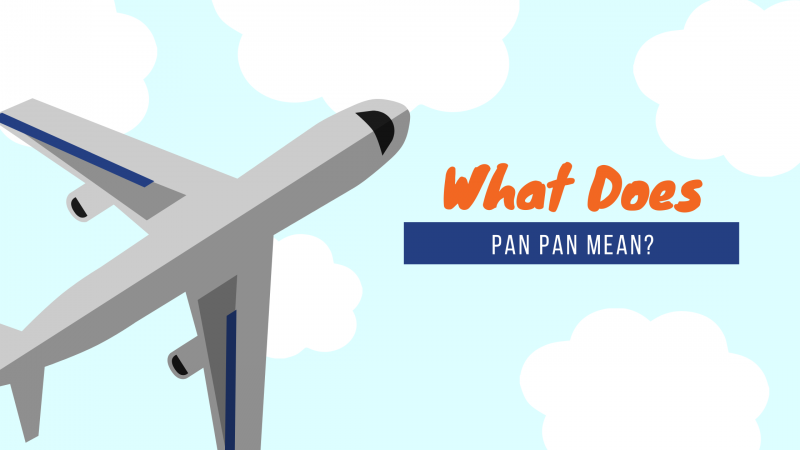 It is an odd-sounding phrase for those not in the aeronautics or aviation industry. In this guide, we explore the meaning behind ‘pan pan’, where it came from, and how its used.

What is Pan Pan?

Derived from the French word ‘panne’, Pan Pan is used as an internationally recognizable distress signal for aircrafts and ships. In French, panne can be literally translated to breakdown or failure.

In the majority of cases, a Pan Pan distress call is made due to mechanical failure or component breakdown. For those less familiar with the differences, this phrase is often misused as a ‘mayday’ alert (more on this later).

Today, modern aviation has adopted the three-letter acronym to mean ‘Possible Assistance Needed’. In this context, the distress signal would indicate that although they are not immediately experiencing an emergency, they are experiencing issues that could result in one in the future.

If red is emergency, and yellow is caution, ‘pan pan’ would fall into the ‘caution’ category.

How is the Distress Signal Pan Pan Made?

The signal is made over radiotelephony (phone, radio, etc.), but can also be made via Morse Code. It is made by those aboard a vehicle, aircraft, ship or boat to declare an urgent situation that may pose imminent danger in the near future. Radioing ‘pan pan’ is the proper way to inform rescuers that there is an urgent problem in their area of service that may need assistance in the near future. This gives rescue crews time to mobilize and prepare just in case.

There is a lot at stake when flying the sometimes unfriendly skies around the world. From cargo to passenger safety, it is a pilot’s duty to do everything they can to make sure they arrive safely and intact.

Within the aviation industry, there is a standardized hierarchy of words that are reserved for distress situations experienced in-flight.

As it relates to ‘Pan Pan’, this signal to air traffic control would be used for situations where there is the high possibility of imminent danger, such as the risk of a fire, low fuel, or other serious issues that have not happened but have a high chance of occurring.

When to Signal Pan-Pan vs. Mayday

A Pan-Pan distress call should be made only for situations that are not currently life-threatening, but may require assistance upon arrival or if the conditions deteriorate. For example, a single jet engine failure may not put the flight in immediate jeopardy, but if another engine fails then it could elevate from a ‘Pan-Pan’ to a Mayday call.

A Few More Examples Include:

Mayday calls are the most serious and are reserved only for life-threatening situations.

A Few Examples Include: