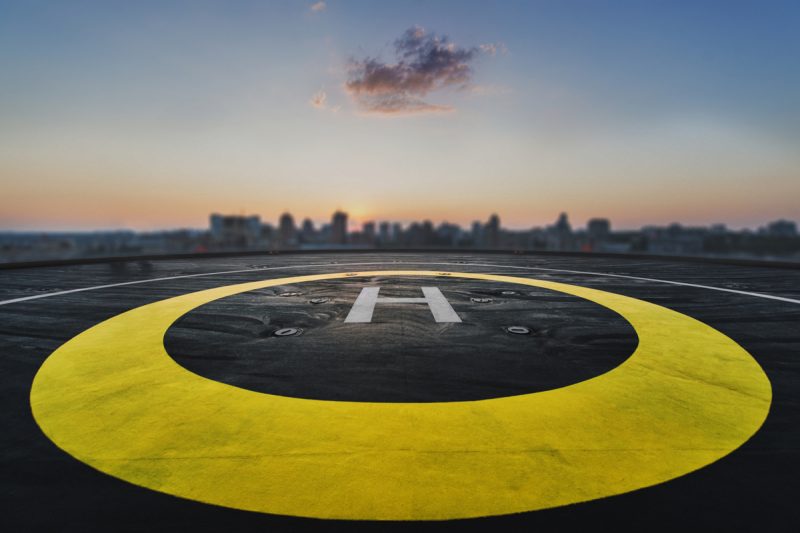 The word helipad is used to describe a place where helicopters both take off and land, but there is much more to it than that. In this guide, we’ll answer some of your most pressing questions about the meaning of a helipad.

What is a Helipad?

In the simplest of terms, a helipad is a uniquely designed ‘pad’, engineered to help a helicopter take off and land safely. Despite the fact that helicopters can land on virtually any flat and secure surface, a helipad offers the benefit of a clearly defined, well-marked, stable, secure, perfectly flat, and hard surface clear from any obstacles from which to take off and land.

What is a Helipad Used For?

These pads aid in optimizing airflow and force distribution from the helicopter’s propellers, assisting with smooth landings and efficient takeoffs.

What Does the “H” Stand for On a Helipad?

You may have noticed that many professionally made helipads are marked with a big letter ‘H’ on them. Although there are inconsistencies in how the ‘H’ is used, and even if it is present at all, when present it does serve a purpose.

The ‘H’ is intended to point to the preferred landing direction, with the two landing rails of the helicopter placed in the same formation as the H-pattern. In other cases, the ‘H’ may have been intentionally aligned to designate magnetic or true north.

Apart from that, the big ‘H’ is an easily recognizable letter used to quickly identify the helipad as a safe place to land a helicopter.

Do Airports Have a Helipad?

Oddly enough, the majority of airports are not outfitted with a designated helipad.

Is a Heliport Considered an Airport?

A heliport is a central hub or ‘rotor station’ designed specifically for the use of helicopters and other types of vertical lift aircraft. Heliports resemble airports in many ways, with all of the usual features including a hangar, fueling area, air traffic control tower and more. However, don’t expect these to be outfitted with the amenities of a large commercial airport. The majority of heliports are small and/or privately owned facilities.

What is the Difference Between a Heliport and a Helipad?

What Color is a Helipad?

Helipads notoriously lack consistency in their construction and markings. However, there is one standard that has stood the test of time, and that is the use of GREEN perimeter lights around the perimeter of the helipad.

As for the helipad surface itself, this color can vary widely. Typically the base color will be a stark contrast to the markings. For example, a dark red, brown or black with white lettering and lines.

Can a Helicopter Land Without a Helipad?

Helicopters are versatile, nimble and capable of both taking off and landing in areas that would otherwise be prohibitive to fixed-wing planes. But is a helipad necessary? Turns out, a helipad is not a necessity. Although preferred, a helicopter can take off and land safely so long as the area is relatively level, stable, and free from debris.

And that’s about all there is to the meaning of a ‘helipad’. We hope you enjoyed this brief guide.