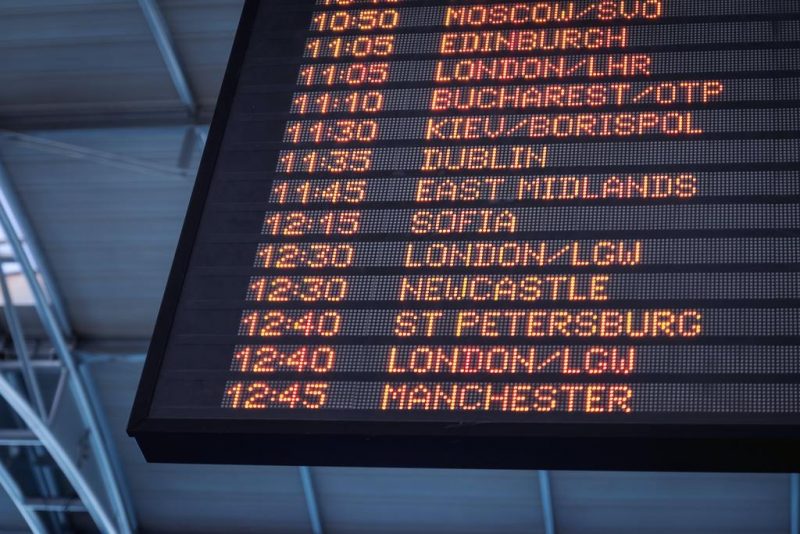 Busiest Airports in the World

2020 proved to be a challenging year for air travel, and the International Air Transport Association (IATA) predicts the first half of 2021 not to look much different. But it’s important to remain optimistic about the future as travel restrictions begin lifting.

As it shows, the statistics tend not to fluctuate year to year, with Hartsfield-Jackson Atlanta International Airport ranking at the top since 1998.

The United States and China continue to hold their places in the lead with the most airports ranking in the top 10 busiest in the world with four and two, respectively, as of 2019.

Keep reading to discover more information on the top 10 busiest airports in the world as of 2019.

Originally open for business in 1973, today, Dallas/Fort Worth International Airport is the biggest hub for American Airlines. DFW covers 17,207 acres, 27 square miles, and is larger than the entire island of Manhattan.

Ranking in tenth place for the busiest by passenger traffic, DFW also ranks at number three busiest based on total aircraft movements. Always coming close to the top ten, DFW has been close, ranking eleventh in 2016, twelfth in 2017, and fifteenth in 2018.

Just barely following the opening of DFW, the Charles de Gaulle Airport opened in 1974. Also known as the Roissy Airport, this airport in Paris spans 32.38 square kilometers or 12.5 square miles.

CDG ranks not only the ninth busiest airport in the world but also as Europe’s second busiest following Heathrow, based on the number of passengers. When looking at cargo numbers, CDG is the eleventh busiest in the world and first in Europe.

Learn More: Which Private Jet Has The Longest Range

London Heathrow Airport was first operational in 1929 as a small airfield known as the Great West Aerodrome. LHR covers 12.27 square kilometers or 4.74 square miles, and as of December 2020, got approval for the expansion of a third runway.

LHR is the primary hub for British Airways as well as the primary operating base for Virgin Atlantic. Nearly a century after opening, today LHR ranks seventh busiest globally, second busiest by international passenger traffic, and number one as the busiest airport in Europe, and one of many airports in London. Read more about London Private Jet Charter

Today ORD is the sixth busiest airport globally and serves as a central hub for United Airlines and American Airlines. ORD also operates as a focus city for both Frontier Airlines and Spirit Airlines.

Tokyo Haneda Airport opened in 1955 and today is one of two airports that serve the Greater Tokyo Area. In 1939 the airport was expanded to cover 72.8 hectares or 180 acres, and during World War II, the military used it for transport exclusively.

HND is the primary base for Japan Airlines and All Nippon Airways, the two major Japanese airlines. HND serves as a primary base for other airlines, including Air Do, Skymark Airlines, Solaseed Air, and StarFlyer.

The origin of Dubai International Airport began in 1937 with the Empire Flying Boats. Today, DXB covers 7,200 acres with the largest airport terminal globally, Terminal 3, also the second-largest building in the world by floor space.

Emirates has the largest airline hub in the Middle East, located in DXB’s Terminal 3. DXB is the fourth busiest airport globally by passenger traffic and the number one most active airport in the world by international passenger traffic. DXB ranks sixth in terms of cargo movement.

Once fields of wheat, barley, and lima beans, in 1930, Los Angeles International Airport would open, gaining its international name later in 1949. Today covering 3,500 acres of land, LAX is one of several other airports in the Greater Los Angeles Area.

In the last decade, PEK has climbed the rankings quickly. Since 2010, PEK has sat in the second seat of the busiest airports globally based on passenger traffic and, as of 2012, ranks thirteenth in terms of world cargo traffic.

Opened in 1980, Hartsfield-Jackson Atlanta International Airport got its name from William B. Hartsfield and Maynard Jackson, previous mayors of Atlanta. Today, ATL spreads out over 4,700 acres and serves as the primary hub for Delta Airlines.

ATL has held the title of the number one busiest airport in the world since 1998 in terms of overall passenger travel. Regarding international passengers, ATL ranks seventh overall.

Although 2020 will have significantly smaller numbers in passenger travel than 2019, the rankings will not be changing much according to reports thus far. Here’s to hoping for a brighter future to come for all airports worldwide.