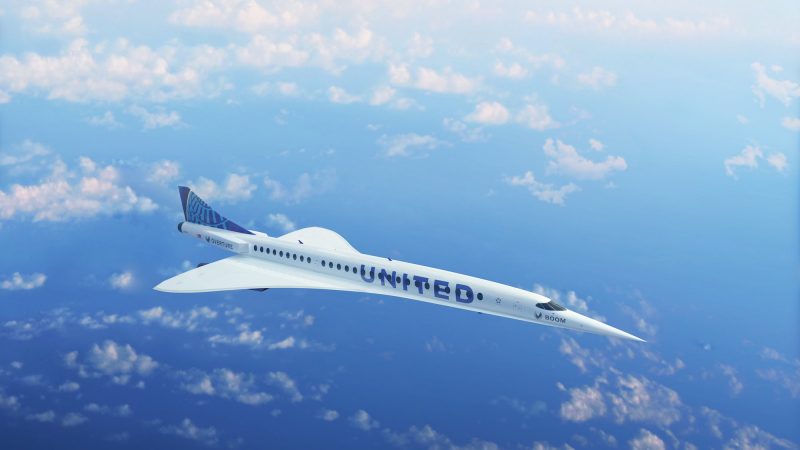 07 Jul About The Boom Supersonic Jet

Ushering in a New Age of Air Travel

Aviation innovator, Boom Supersonic, headed by visionary CEO Blake Scholl aims to establish a new era in air travel, one that offers an exponentially faster means of travel, all while being more eco-friendly than current solutions.

Boom Supersonic is on a quest to engineer a passenger jet capable of traveling at a ground-breaking Mach 1.7. What does that mean?

For example, passengers aboard such an aircraft would be able to jet-set from London to New York in just half of the time it takes today…or 3.5 hours.

Need to get from San Francisco to Tokyo for an emergency meeting? How does a mere 6-hours from departure to landing sound?

Can Boom Supersonic Achieve the Impossible?

United Airlines seems to think so.

As part of this venture, the company has partnered with none other than United Airlines, an industry titan that has agreed to invest $3 billion on the production of 15 aircrafts capable of carrying up to 88 passengers on flights spanning nearly 5,000 miles.

According to Scholl, “United is the first commercial airline to place a firm order for civilian supersonic aircraft since the 1970s.”

However, some have doubts about the company’s ability to pull this off. With just 150 employees and a fund of just $270 million to work with (minimal by aerospace standards), the company has its hurdles to overcome.

Commercial airliners are notoriously complex and challenging to produce. Add in supersonic speeds to the mix, along with safety and regulatory hurdles, and you have what could be either a recipe for disaster or unparalleled success.

Behind But Not Out

As to be expected given the task at hand, it is not surprising to learn that Boom Supersonic is currently years behind its aggressive schedule. Citing mainly technical problems, it aims to re-align with the original timeline (or as near as is possible) as these issues are worked out.

Originally planned for 2017, the introductory flight test of a ‘scaled down’ version of its supersonic jet is set to be demoed later this year, or early next year at the latest.

Enough Skin in The Game?

According to advisor of Hermeus (a private jet manufacturing startup) and former president of Amazon founder Jeff Bezo’s space startup Blue Origin, Rob Meyerson has been quoted as stating that “It costs billions of dollars to build an aircraft like this and requires funding from the government and public markets.”

Meyerson is no stranger to the development of sonic jets. Similarly, Hermeus is attempting to design private jets capable of accelerating travel times, with a jet capable of flying from London to NY in just 90 short minutes.

He went on to explain, “Funding for supersonics has been waning since the 1990s, but in the last three years, in a push to lead other countries, there’s been significant government investment in hypersonics—aircraft that can fly faster than Mach 5.”

The last supersonic airliner was produced by Aérospatiale (which has since become a part of Airbus), and British Aircraft Corporation, along with financial support from both British and French governments.

The Concorde, debuting in 1976, was primarily used for luxury transcontinental flights between Paris, London, New York and D.C.. At the time, the Concorde boasted speeds more than double that of sound, offering unprecedented air travel times.

However, only 14 aircrafts ever made it off the production line. By 2003, the Concorde would see its last flight, after a 2000 crash ending in tragedy and killing all passengers onboard.

Although officially the planes were deemed to be both too noisy and expensive to operate, the 2000 crash no doubt played a role in diminished trust in the plane by the public.

According to Scholl, Boom Supersonic can learn a lot from Concorde’s pitfalls, enabling them to better navigate these waters and ultimately produce a supersonic jet that is more affordable and accessible than was the Concorde.

The end goal, according to Scholl, is to produce its ‘Overture’ supersonic jet at a price tag of just $200 million, putting its cost on par with that of a Boeing 767. While Concorde flights were cost-prohibitive for most travelers (at the time costing more than double the rate of standard business-class fares), it is the hope of Boom Supersonic that reduced production costs will translate into consumer savings and more accessible supersonic flight options.

But what about dealing with the excessive noise the Concorde was chastised for? Scholl explains that Boom Supersonic has contracted Rolls-Royce to aid in the design of high-powered turbofan engines absent of the noisy gas-guzzling afterburners featured on the Concorde.

Apart from noise, this new design will also result in ‘net-zero’ carbon emissions, with the aircraft running on a blend of recycled waste and sustainable biofuels.